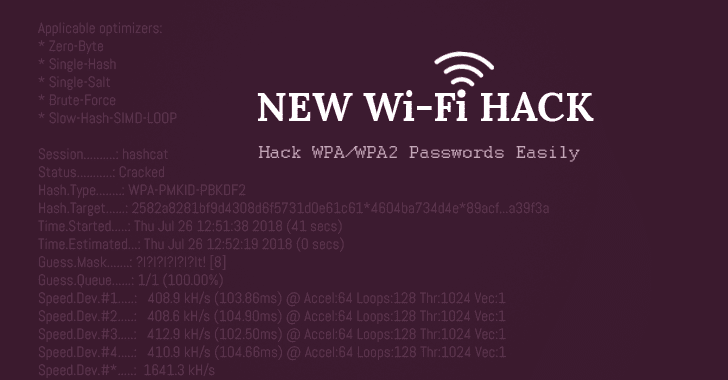 Looking for how to hack WiFi password OR WiFi hacking software?

Well, a security researcher has revealed a new WiFi hacking technique that makes it easier for hackers to crack WiFi passwords of most modern routers.

The attack to compromise the WPA/WPA2 enabled WiFi networks was accidentally discovered by Steube while he was analyzing the newly-launched WPA3 security standard.

This new WiFi hacking method could potentially allow attackers to recover the Pre-shared Key (PSK) login passwords, allowing them to hack into your Wi-Fi network and eavesdrop on the Internet communications.

According to the researcher, the previously known WiFi hacking methods require attackers to wait for someone to log into a network and capture a full 4-way authentication handshake of EAPOL, which is a network port authentication protocol.

Whereas, the new attack no longer requires another user to be on the target network to capture credentials. Instead, it is performed on the RSN IE (Robust Security Network Information Element) using a single EAPOL (Extensible Authentication Protocol over LAN) frame after requesting it from the access point.

Robust Security Network is a protocol for establishing secure communications over an 802.11 wireless network and has PMKID, the key needed to establish a connection between a client and an access point, as one of its capabilities.

Step 1 — An attacker can use a tool, like (v4.2.0 or higher), to request the PMKID from the targeted access point and dump the received frame to a file.

Step 2 — Using the hcxpcaptool tool, the output (in pcapng format) of the frame can then be converted into a hash format accepted by Hashcat.

That’s the password of the target wireless network, cracking which may take time depending on its length and complexity.

“At this time, we do not know for which vendors or for how many routers this technique will work, but we think it will work against all 802.11i/p/q/r networks with roaming functions enabled (most modern routers),” Steube said.

Since the new WiFi hack only works against networks with roaming functions enabled and requires attackers to brute force the password, users are recommended to protect their WiFi network with a secure password that’s difficult to crack.

This WiFi hack also does not work against next-generation wireless security protocol WPA3, since the new protocol is “much harder to attack because of its modern key establishment protocol called “Simultaneous Authentication of Equals” (SAE).”