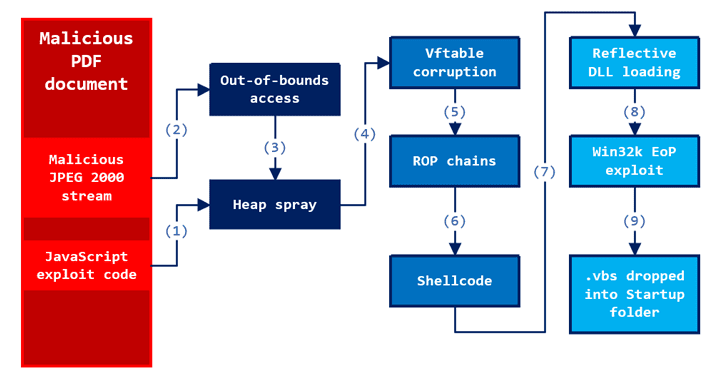 Security researchers at Microsoft have unveiled details of two critical and important zero-day vulnerabilities that had recently been discovered after someone uploaded a malicious PDF file to VirusTotal, and get patched before being used in the wild.

In late March, researchers at ESET found a malicious PDF file on VirusTotal, which they shared with the security team at Microsoft “as a potential exploit for an unknown Windows kernel vulnerability.”

After analyzing the malicious PDF file, the Microsoft team found that the same file includes two different zero-day exploits—one for Adobe Acrobat and Reader, and the other targeting Microsoft Windows.

According to the researchers, the malicious PDF including both the zero-days exploit was in the early development stage, “given the fact that the PDF itself did not deliver a malicious payload and appeared to be proof-of-concept (PoC) code.”

It seems someone who could have combined both the zero-days to build an extremely powerful cyber weapon had unintentionally and mistakenly lost the game by uploading his/her under-development exploit to VirusTotal.

The zero-day vulnerabilities in question are a remote code execution flaw in Adobe Acrobat and Reader (CVE-2018-4990) and a privilege escalation bug in Microsoft Windows (CVE-2018-8120).

“The second exploit, which does not affect modern platforms like Windows 10, allows the shellcode to escape Adobe Reader sandbox and run with elevated privileges from Windows kernel memory.”

The Adobe Acrobat and Reader exploit was incorporated in a PDF document as a maliciously crafted JPEG 2000 image containing the JavaScript exploit code, which triggers a double-free vulnerability in the software to run shellcode.

Leveraging shellcode execution from the first vulnerability, the attacker uses the second Windows kernel exploit to break the Adobe Reader sandbox and run it with elevated privileges.

Since this malicious PDF sample was under development at the time of detection, it apparently included a simple PoC payload that dropped an empty vbs file in the Startup folder.

Microsoft and Adobe have since released corresponding security updates for both the vulnerabilities in May. For more technical details of the exploits, you can head on to Microsoft and ESET blogs.