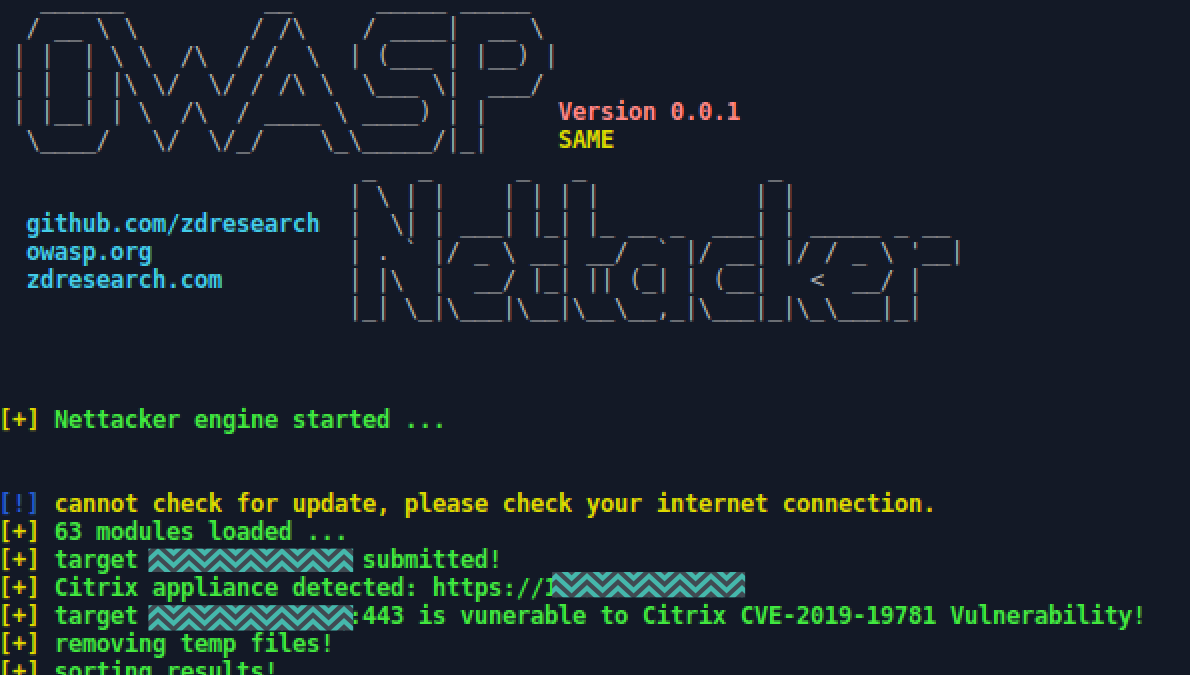 Though mitigations were released on the same day Citrix announced CVE-2019-19781, organizations that did not appropriately apply the mitigations were likely to be targeted once exploit code began circulating on the internet a few weeks later.

Compromised systems cannot be remediated by applying software patches that were released to fix the vulnerability. Once CNE actors establish a foothold on an affected device, their presence remains even though the original attack vector has been closed.

The Cybersecurity and Infrastructure Security Agency (CISA) is releasing this Alert to provide tools and technologies to assist with detecting the presence of these CNE actors. Unpatched systems and systems compromised before the updates were applied remain susceptible to exploitation.

Contact CISA, or the FBI to report an intrusion or to request assistance.

CISA has developed the following procedures for detecting a CVE-2019-19781 compromise.

The impacted Citrix products utilize Apache for web server software, and as a result, HTTP access and error logs should be available on the system for review in /var/log. Log files httpaccess.log and httperror.log should both be reviewed for the following Uniform Resource Identifiers (URIs), found in the proof of concept exploit that was released.

Note: These URIs were observed in Security Information and Event Management detection content provided by https://github.com/Neo23x0/sigma/blob/master/rules/web/web_citrix_cve_2019_19781_exploit.yml.[2]

Reviewing the running processes on a system suspected of compromise for processes running under the nobody user can identify potential backdoors.ps auxd | grep nobody

Further pivoting can be completed using the Process ID from the PS output:lsof -p <pid>

Due to the nature of this exploit, it is likely that any processes related to a backdoor would be running under the httpd process.

The above is the NOTROBIN Bash exploit code. To check for NOTROBIN Presence, analysts should look for the staging directory at /tmp/.init as well as httpd processes running as a cron job.

Running the command find / -name ".init" 2> /tmp/error.log should return the path to the created staging directory while taking all of the errors and creating a file located at /tmp/error.log.

Analysts should focus on reviewing the following logs in /var/log on the Citrix device, if available. The underlying operating system is based on FreeBSD, and the logs are similar to what would be found on a Linux system. Analysts should focus on log entries related to the nobody user or (null) on and should try to identify any suspicious commands that may have been run, such as whoami or curl. Please keep in mind that logs are rotated and compressed, and additional activity may be found in the archives (.gz files) for each log.

Note: The bash log can provide the user (nobody), command (hostname), and process id (63394) related to the nefarious activity.

As with running processes and log entries, any cron jobs created by the user nobody are a cause for concern and likely related to a persistence mechanism established by an attacker. Additionally, search for a httpd process within the crontab to determine if a system has been affected by NOTROBIN. Analysts can review entries on a live system using the following command:crontab -l -u nobody

Open-source outlets have reported that during incident response activities, attackers exploiting this vulnerability have been placing malicious files in the following directories. Analysts should review file listings for these directories and determine if any suspicious files are present on the server.

From a network perspective, this vulnerability will likely not be detectable, given that the traffic will likely be encrypted (SSL). Additionally, due to where they sit on networks, devices such as these are typically not covered in traditional network monitoring and ingress traffic to the device may not be part of a normal SPAN port configuration. In the event network monitoring is available and attackers are using HTTP versions of this exploit, CISA recommends looking for URIs containing /../ or /vpns/ to identify potentially malicious activity. It is also worth surveying the traffic for any requests to .xml files or perl (.pl) files as well, as this would not be consistent with normal Citrix web activity. As with the web logs, analysts would be looking for a successful POST request followed by a successful GET request with the aforementioned characteristics.

Given that a compromise occurred, activity to look for would be outbound traffic from the Citrix server, both to internal and external hosts. In theory, if an attacker placed a backdoor on the system, it should be connecting outbound to a command and control server. This traffic would most likely be anomalous (outbound TCP Port 80 or 443), given that one would only expect to see inbound TCP/443 traffic to the Citrix server as normal activity. If an attacker is leveraging a Citrix device as an entry point to an organization, anomalous internal traffic could potentially be visible in bro data such as scanning, file transfers, or lateral movement. An exception to internal traffic is that the Citrix ADC device is much more than just an SSL VPN device and is used for multiple types of load balancing. As a result, an ADC device may be communicating with internal systems legitimately (web servers, file servers, custom applications, etc.).

CVE-2019-19781 is an arbitrary code execution vulnerability that has been detected in exploits in the wild. An attacker can exploit this vulnerability to take control of an affected system.

The vulnerability affects the following appliances:

The resources provided include steps for standalone, HA pairs, and clustered Citrix instances.

Consider deploying a VPN capability using standardized protocols, preferably ones listed on the National Information Assurance Partnership (NIAP) Product Compliant List (PCL), in front of publicly accessible gateway appliances to require user authentication for the VPN before being able to reach these appliances.